Vaping is a great way to kick the cigarette habit and is generally thought of as a healthier alternative to smoking.

Vaping is a great way to kick the cigarette habit and is generally thought of as a healthier alternative to smoking. It may save you a good deal of money in the end, too, given today’s high cost of cigarettes. It’s not as easy as just picking up the latest and greatest mod and some e-juice, though. The initial investment can cost you a good deal of money, and you have to figure out what your body needs in terms of nicotine. Making the right choices from the beginning will prevent you from wasting money or going back to cigarettes. With that in mind, here’s our step-by-step guide on vaping. 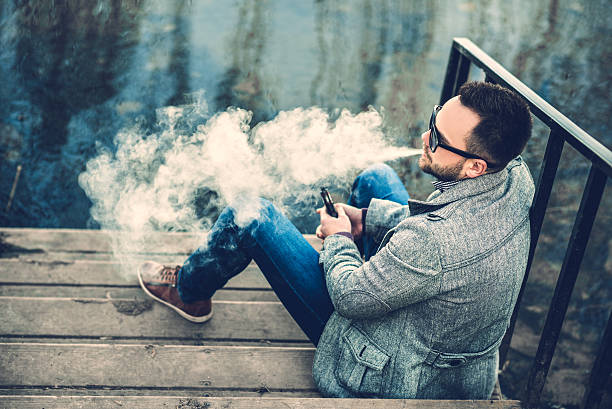 If you want to vape, then it’s probably a good idea to also decide whether you’re also ready to quit cigarettes. While there are plenty of people who do both, you’ll have a higher chance of success with vaping if you quit the “analogs” entirely, and prevent nicotine overdose. Why? Let us explain.

Cigarettes, by design, will deliver a fairly regular dose of nicotine per cigarette. The brain typically associates the end of a cigarette with enough nicotine in most people, so you likely won’t pick up another. Vaping doesn’t have that. Instead, you’ll be able to vape anytime you want, and if you have a tank, there’s a lot more nicotine in that than you’ll need in any one sitting. So your body loses that mental cue, and initially, it might be hard to judge when enough is enough.

If you decide to do both, you might be asking for trouble. You might vape too much early on, and when combined with the nicotine in the cigarettes, you might be putting too much in your body. Symptoms of nicotine overdose aren’t pleasant, either, and include everything from nausea and vomiting to headaches and bouts of dizziness. These negative experiences could lead you to stick with cigarettes. Make the commitment to quit cigarettes altogether when you start to vape. For most people, it’s simply the smarter move.

The right amount of nicotine varies based on a variety of factors. A good guide is how heavy of a smoker you were. Typically, e-juice comes in five different levels (3, 6, 12, 18, and 24mg). There is e-juice out there with zero nicotine, however, as well as juice with substantially more. We’d recommend sticking with the standard levels first, and keep in mind that you may need to do some trial and error to find the right level for you.

If you smoked more than a pack a day, chances are that you’ll need a nicotine strength of at least 18mg to start off. Many need to start out at 24mg to get the right amount of nicotine, sure, but we suggest starting low to see how your body reacts. Pack-a-day smokers will likely need either 12 or 18mg in the beginning.

One neat thing that seems to happen as you vape longer is that your body typically starts to crave nicotine less — just watch your body for some of the aforementioned overdose symptoms. If you feel start to feel the effects, try lowering your nicotine level. There are some vapers out there who have completely weaned themselves off of nicotine altogether using this stepping-stone method — who knows, you might eventually not need to vape either!

Another thing to remember: your vaping device also plays a part in the nicotine level. A disposable e-cigarette has meager vapor production, so the amount of nicotine delivered is less per puff. Those cloud-blowing mods have much better vapor production, however, meaning you’re likely getting more nicotine in a single shot.

If you’re going right to cloud chasing, consider 3 or 6mg instead. Some heavy smokers might need 12mg, but most won’t.

When choosing the type of e-cigarette that’s best for you, ask yourself a few questions first. Is discreteness a concern? Are you comfortable with some basic construction and consider yourself more mechanically inclined? Are you looking for large cloud production? Most importantly, how much are you willing to spend? After all, prices range from as little as $30 to an upward of $200.

If discreteness is a concern, you might want to consider what is called a “cigalike.” These look like cigarettes and typically come with a disposable, unscrewable end that holds the e-liquid (Blu is an example of these). You’ll also find disposable cigalikes wherever cigarettes are sold. Once you’re done, you simply throw the whole thing out, not just the tip.

A big drawback to these is the cost. While they may be cheap up front (some disposables are less than $10), you’ll spend far more than other options in the long run. For the irregular smoker though, this might be the best alternative.

If you don’t mind spending a bit more and losing some discreteness, go with a vape pen. While you still can use pre-filled, disposable cartridges with a pen, you can also use a tank. This means you can change juice as you see fit, and while there are ways to replace the coils — the element that heats your e-juice into vapor — these tanks are built to be disposable and low-cost, so can simply get a new one when you’re done. Plus, if you have a few of these tanks with different types of e-juices, you can switch flavors whenever you want.

Vape pens cannot deliver a lot of power, however, so vapor production is not going to be substantial. As a general guideline, they will produce about as much vapor as a cigarette does smoke in most cases. If you want more in the way of vapor production — and typically better battery life — consider a “box mod.”

Box mods offer a great deal of flexibility in what you can do. These units push way more power, which, in turn, gives you more flexibility in how you vape. While you can run tanks on these devices, many box mod users opt for a special type of tank called an RDA or RBA. RDAs, short for rebuildable dripping atomizers, are quite popular. Essentially, you “drip” the e-liquid directly onto the cotton wick. Others still prefer the tank-like qualities of the RBA, or rebuildable atomizer, so they go that route.

With greater customization comes a higher price, though. The mod itself is the most expensive part, and you’ll need to buy a battery in many cases. A lot of mods also come with a tank, but you might also need to buy that as well, and possibly a battery charger. As you can see, it can quickly become expensive. As a box mod user myself, I’ve spent several hundred dollars on batteries, various tanks, and all the accessories and tools needed.

Finally, there is an even more involved type of vaping device called the mechanical mod. Mechanical mods are free of any electronic control to regulate the vape and allow for the ultimate in customization. This said, you need to have a background in vaping and some basic electronics skills to properly utilize them. We don’t recommend going this route if you’re new to vaping, but once you get the feel for the practice as a whole, mechanical mods may be something to try out later.

The FDA and you

If you’ve been interested in vaping, you’ve probably heard about the FDA’s regulations on e-cigs and how they’re sold. Here’s a quick overview of how this changes things, and how it affects you.

Vape shop employees are not permitted to really do anything for you other than sell you the equipment. This means if you go the more customizable route, you’re on your own, which is one of the reasons why we strongly suggest you start with the basics first. They also really can’t say anything positive about vaping, so most shops will be leery of discussing anything more than the product.

You might also expect to sample juices. While this still can happen, they must charge you to do so, so bring some cash. Also, make sure you have your ID handy — you’re likely to get carded if you appear under the age of 27. There is a silver lining in these regulations, though. While some smaller manufacturers may not be able to afford the new pre-approval process, e-cigarettes should, in general, should become safer over time.

There’s also confusion with how the law will actually work in real life, so things may change over time. This is especially true for e-juices, given some current lawsuits are already arguing that the pre-approval process for vaping devices shouldn’t apply to e-juices.

What the FDA process doesn’t prohibit, however, is other vapers helping vapers. Still, have questions on where to start? Contact us.